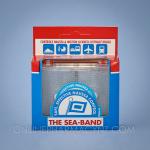 The Sea Band provides effective nausea control for most sufferers from all forms of motion sickness without causing drowsiness or other side effects. The Sea Band operates by exerting a carefully controlled pressure on the accupressure point (called the Nei-Kuan Point) on both wrists. The Sea Band is harmless and may be used by adults and children. It has been found effective also in other conditions that produce nausea such as pregnancy, radio therapy and chemotherapy.

The bands must be worn on both wrists. The button should be placed over the Nei-Kuan point in each wrist. To find the Nei-Kuan point place your middle three fingers on each side of each wrist with the edge of the third finger on the wrist crease. The Nei-Kuan point is just under the edge of you index finger between the two central tendons. Position the button facing down over this point. It takes from 2-5 minutes to become effective and continues to protect the wearer while being worn.

No prices listed for this product.